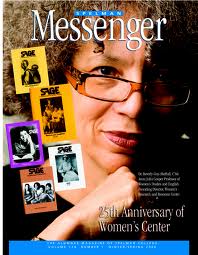 “In 1981, we began with the simple goal – to introduce more courses on women in the curriculum.  Now, nearly three decades later, the Women’s Center has had an impact neither I nor my colleagues would have ever imagined.  We have uncovered and made available buried narratives of women of African descent.  We have advocated on behalf of Black women nationally and globally.  We have provided a space and catalyst for collaborations across difference.  And we have carefully crafted curricular and co-curricular programs so that our students are able to explore the interconnectedness of system inequalities.  In addition to the expanding field of Women’s Studies, we have student going into public health, international policy, journalism, scientific research, politics, filmmaking and education – careers that allow them to affect change.”