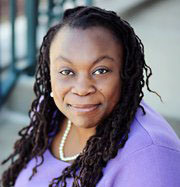 Tarshia L. Stanley is associate professor and chair in the English department at Spelman College. She teaches courses in film and media studies particularly as it pertains to images of women of African descent. She has authored several articles critiquing Black women in African, African American, and Caribbean cinema as well as Black female iconography in American popular culture.

She edited The Encyclopedia of Hip Hop Literature published by Greenwood Press in 2008 and is at work on two manuscripts. One titled Mothering Our Daughters: Mediating the Messages about the responsibility of women to help girls navigate the messages they receive about femininity from the mass media. The second hopes to add to the discussion of a viable definition of African Diaspora literature through the work of speculative fiction writer Octavia Butler. She facilitates the student-powered Mother/Daughter conference, which invites girls 7-17 and their mother/mentors to campus in the spring semester to share in the journey to healthier self-esteem.

Dr. Stanley recently incorporated the creation of Public Service Announcements in her film classes at the request of the American Psychological Association’s Health Images Campaign. These student-filmed PSAs will be made available to Parent/Teacher Associations and healthy images advocate groups across the country to help facilitate the conversation. She received the A.B. from Duke University and the MA and Ph.D. from the University of Florida where she was a McKnight Doctoral Fellow. She was a 2010-2011 Mellon HBCU Faculty Fellow at Duke University.